The last couple of weeks have been quite a whirlwind! Moving was much more difficult than we had expected, to put it lightly. Actually, Frank described it as the most difficult thing he had ever done, and I don’t think he was exaggerating. As for myself, I would put it just behind childbirth on the difficulty scale. Previously we had each moved our own individual possessions; this was our first time moving a family household. Here’s the thing about having lots of hobbies: gardening, music, cooking, sewing, knitting, birding, camping, whitewater rafting, skiing, biking, and canoeing all come with a ton of gear!! Now I understand why people pay thousands of dollars to hire professional movers.

When we returned from our family vacation on Monday we immediately started packing everything into boxes. Our plan was to be on the road on Friday. Luckily we had lots of help from Frank’s mom, Bobbie, both boxing fragile items and helping entertain our one-year-old. We boxed frantically for two days straight and barely seemed to make a dent. We had booked a U-Haul truck on Wednesday, so although we weren’t finished boxing we picked it up the truck and began to transfer things from the house. We were fortunate to have help from Shane at Kanawha Piano Gallery with moving the piano down our perilously steep driveway! The truck looked huge at first, but by Thursday evening it was almost full and there was still so much stuff left in the house. Despite help from a couple of our dear friends, it became clear we would need a full extra day to get everything out of the house. By Saturday morning we were still cramming things into the truck, desperate to get on the road. By mid-day Saturday we finally closed up the truck, crammed what houseplants we could fit into the cab of the pickup, tied on the canoe, loaded the pickup onto a trailer behind the U-Haul, and started down the highway. Frank drove the U-haul with the two cats in the cab while Bobbie, Marlin and I followed behind in the car.

With a baby in the car we knew we had to pace ourselves, so we chose a good mid-way stopping point in advance and booked a pet-friendly motel in southern Illinois. The drive went smoothly all the way until evening, when we reached Indianapolis, at which point the situation took a turn for the worse. We had gotten separated from Frank, and our navigation app inexplicably sent us off onto some circuitous one-track country roads. Around that time Marlin started wearing out on the whole car riding thing and began fussing. When we finally got back to the interstate we cheered and then immediately missed our exit. Marlin was all-out screaming as we drove through the Indianapolis neighborhoods in a desperate attempt to get back on course. After a harrowing 45 minutes he fell asleep and we crossed the Illinois state line. The commotion was over as quickly as it began and we breathed a sigh of relief as we rode along in the suddenly quiet car, heading into a gorgeous, tranquil sunset over endless corn fields.

The second hiccup in our travels came the next morning, when we got back on the road after a fitful night’s sleep of cats running back and forth across our beds. We had left our motel and caravanned across the highway to gas up our vehicles, and we were just getting ready to leave when Frank noticed that one of the cat carriers was empty. We frantically searched the cab, but Mister, our big black kitty, was nowhere to be found. Panicking, I turned and sprinted across the highway to the motel, calling for him a shaking voice. When I reached the parking lot, he came springing out of the bushes at the sound of my voice and I scooped him up. Frank pulled up in the U-haul and the cat spooked at the sight of the big truck, scratching my arms as I fought to keep him still. He tried his hardest to escape but I managed to get him through the door of the truck and stuffed him back into his carrier.

The second day of driving went smoothly and before long we reached the rolling terrain of southwestern Wisconsin, strangely reminiscent of the Appalachian terrain that I’ve grown to love so much. By mid-afternoon we finally pulled up to our new farm to find my mom and aunt ready and waiting to help us unload. On the second attempt Frank was able to maneuver the monstrous U-Haul and trailer into the driveway and we began to unload the contents of our lives into our new garage, box by box.

It took the rest of the day and much of the next to get the truck empty enough to tackle the piano, which was strapped to the foremost wall of the truck. With the help of our mothers and my aunt, Frank used his pickup to shuttle the piano to the front porch, and they were able to roll the piano up a makeshift ramp straight into the front door.

Our new surroundings are as tranquil as they are expansive. The farm sits on a gentle ridge and the serene rolling landscape can be viewed from nearly 360 degrees. After spending six hot, humid summers in West Virginia, hemmed in by hills on every side, it was almost startling to step out into the cool breeze of our ridge-top with its distant horizons and wide-open sky. Equally arresting is the lack of man-made noises and lights. At night the sky is full of stars and insect noise is the only sound. 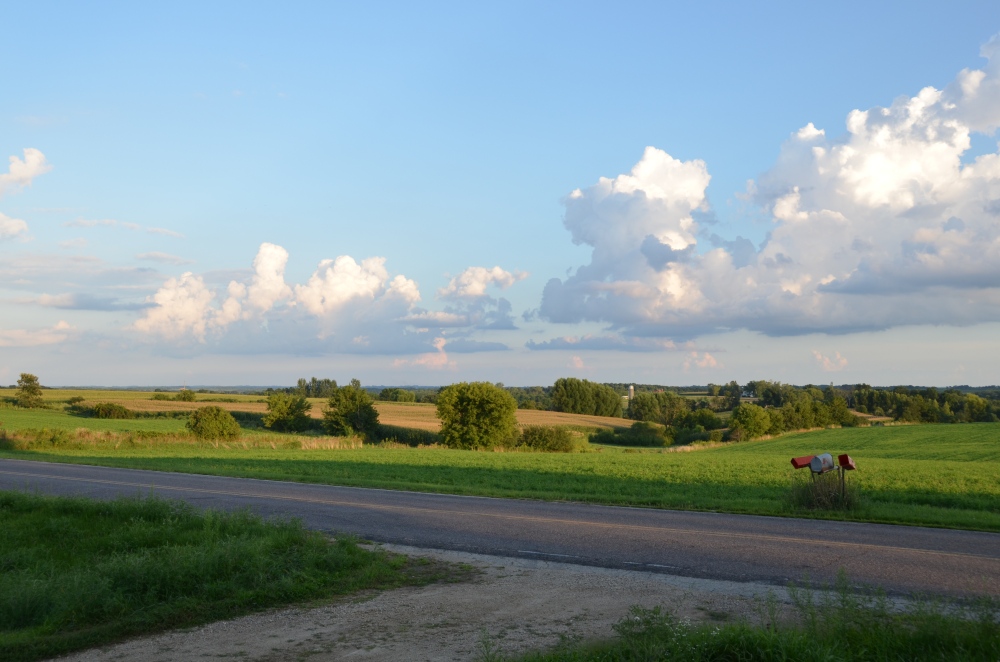 Moving onto an already established farm has its perks, and I was thrilled to see apple trees and grape vines, as well as the largest pear tree anyone had ever laid eyes on, all heavy with almost-ripe fruits. There are an overwhelming number of outbuildings on the property: the garage, a second small garage, a large barn, a garden shed, a greenhouse with attached office, a chicken house, a corn crib, an old silo, and a tiny shack next to the silo.

We found and assortment of tools, flowerpots, kitchen items and sundry furniture here and there around the property. We also discovered that the property has a “gnome problem”.

The previous owners had left some framed photos on the kitchen table dating from 1911, a year after the farm was built. I pulled apart the frames and was fascinated to find names of the original family members. I discovered that our farm belonged to Augustus and Mary Ann Smith, who raised seven children (presumably in a different house on the property, since the children are adults in the photo). I also learned that the original name of the farm was Pleasant Ridge, a fitting title which I think we may use for our own business. It’s exciting to live on a farmstead with such a rich history, and I hope we can do justice to the Smith family’s vision for their home.